During your stay in the “cité borquine” (borquin = inhabitant of Saint-Hubert) you will soon notice the various prestigious monuments. They remind us of the fate of the city, linked to the abbey. Without forgetting the legendary roundabout “of the deer with a shining cross between its antlers“, which in turn reminds us of the famous legend…Saint-Hubert, named after the protector of hunters, has long been considered the most emblematic and mythical city of hunting. This reputation was recognized in February 1990 when the EC Federation of Hunting Associations designated it as the “European Capital of Hunting“. The title “European Capital of Nature” which is inevitably associated with the former was later added.Since 2016, Saint-Hubert has also been recognised as the “international capital of the hunting horn“. Although hunting with hunting horns is not practised in Belgium, this instrument is found during the masses played by the Royal-Forêt Saint-Hubert.

The Basilica of Saint-Hubert This is an important place of pilgrimage in honour of Saint-Hubert and is also recognised as an exceptional heritage of Wallonia. The first foundation dates back to the 7th century, but the current building was for the most part built in the 16th century. The basilica is accessible every day of the year. You can visit it for free, rent an audio guide or book a guided tour which can also include a tour of the attic and the bell towers.

The legend of the deer with a shining cross

This legend dates back to the 15th century. The unrepentant hunter Saint Hubert surrenders himself to the joys of a mundane life that both his wife and his faith neglect…During a hunt on a major religious holiday in the Ardennes forests, Christ appears to him on the cross amidst the antlers of a deer.The latter is beautiful and completely surrounded by a halo of dazzling light. He asks him to repent and take advice from Bishop Lambert.Hubert then retreats into the forest as a hermit… During a pilgrimage to Rome, his master Lambert is murdered in Liège. Pope Sergius the 1st, in response to a heavenly request, chose him as his replacement and ordained him bishop. During the ceremony, an angel brings him the miraculous stole that will accompany him throughout his term of office, and Saint Peter gives him the keys “said of Saint Hubert”, symbol of his spiritual power over souls and bodies. 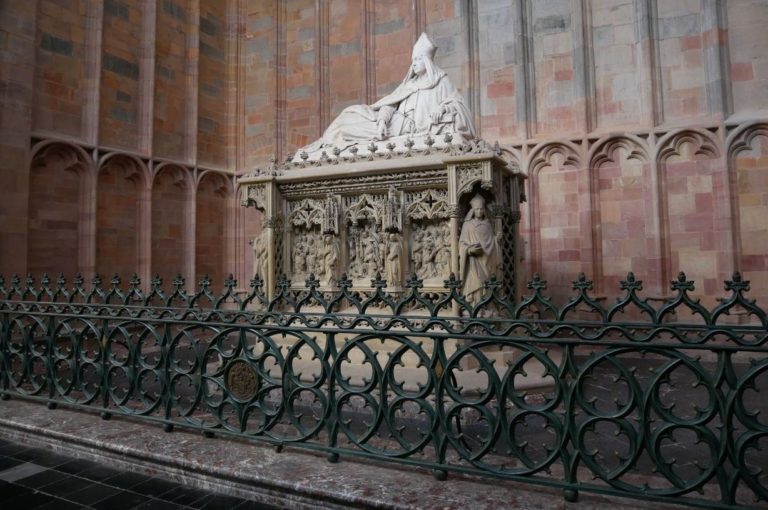 Saint Hubert was born in the middle of the 7th century into an important family of the Austrasian aristocracy. Around 705 he succeeded Saint Lambert, on the episcopal throne of Tongeren-Maastricht.For 25 years he travelled through his very large diocese to evangelise it. He died in Fourons-le-Comte on 30 May 727 from gangrene. His body was brought back to Liège in St. Peter’s Abbey, which he had personally founded. In 687, Pepin II of Herstal founded a first monastery in Ambra (Roman ruins). The monastery will later be named Andain and

much later Saint-Hubert. After numerous miracles at his tomb, he was canonised on 3 November 743 in the presence of King Carloman and several bishops and his body was carried to the altars. On this occasion one discovers that his body, stole and episcopal robes are still undamaged. Aix Council Decision of 817 transfers his body.Together with the emperor, numerous bishops and a large number of believers, his body arrived in Andain on 30 September 825. Until October 1568 his body is said to remain undamaged, exhibited for the worship of the faithful in the crypt of the abbey church or at the front of the choir on public holidays.Since the French Revolution there are no more clues and the body remains unfindable.

Resting in the heart of the vast Ardennes forest, Hubert already healer of rabies became very early on the patron saint of the Ardennes people, the hunters and the foresters.In order to ritualise their request for healing, the rabid people underwent an operation called “incision”: the chaplain made an incision in the patient’s forehead and placed part of the miraculous stole in it. The patient then had to follow a strict hygienic and spiritual novena, but once he was cured at the end of the novena, he had the privilege of giving any other person who was bitten or suspected of rabies a 40-day respite so that he had time to go to Saint-Hubert. The rabid animals were slaughtered and the healthy ones were protected by the saint by imposing the keys of Saint Hubert.

Despite the discovery of the vaccination against rabies in 1885 by Louis Pasteur, the cult of the saint remained very much alive in Belgium and Western Europe. St. Hubert is today invoked by people who are too nervous, against pain and illnesses of the nervous system, toothache…

Nearly 13 centuries have passed and the tissue of the stole has not been removed much. Today it remains the essential relic of Saint Hubert.

Bless your pet in Saint-Hubert. Every year

in Saint-Hubert there are two occasions when you can have your pet blessed in front of the basilica. These are also occasions when the very special sounds of the hunting horn can be appreciated.

The first week-end of September on the occasion of the “Les Hubertoises” celebrations. Every first week-end of September in Saint-Hubert. On the programme: international club show of the dogs of Saint-Hubert, high mass sound by the hunters with their hunting horns, blessing of the animals and distribution of blessed bread, street theatre, tables of the Abbey, historical spectacle…Relive Saint-Hubert from yesteryear! On 3 November during the feast of Sint-Hubertus To commemorate the canonization of Saint Hubert, the feast is held every year on 3 November. The horn-blowers will perform an important mass in the basilica. During this celebration the bread is blessed, followed by the blessing of the animals outside.The sandwiches blessed in the name of the saint are characteristic of his cult. These rituals are intended to express the protection granted by Saint Hubert.

Walking around in the Saint-Hubert wildlife park

A visit to the Saint-Hubert wildlife park is a must, especially for children. Located 2 kilometres from the city centre, this park has the peculiarity of allowing game to live in semi-freedom. It’s a good idea for a family activity if you want to combine a forest walk with the discovery of the fauna and flora of the Ardennes!

Full nature in the Provincial Domain of Mirwart

Forest as far as the eye can see, untouched nature, way marked paths, a

fish farm, the Lomme! So many invitations to recharge your batteries, go for a walk or relax in the Mirwart Provincial Domain. At the bottom of the village of Mirwart (one of the “Most Beautiful Villages of Wallonia“) lies the Provincial Domain of Mirwart, a purely green setting.Many ponds are used to breed the fario trout, a native species used to preserve fish stocks in the region’s rivers.These ponds are dispersed in the heart of a protected forest. From one walk to the next you will find many remnants of Mirwart’s past such as the Marsolle blast furnace, a witness to the pre-industrial period, or the 19th century ice house dug into the hills and today dedicated to the hibernation of the bats. A didactic apiary allows you to approach the world of bees and several picnic and barbecue areas are also accessible.

THE MUNICIPALITY of SAINT-HUBERT, is also...

Other places and villages that deserve more than just a quick glance! To discover them, you can for example follow the gastronomic circuits “Unexpected flavours” (122 km) and “Flavours in the Celtic country” (70 km).These tourist routes take you through the Saint-Hubert region from one local producer to another. Some receive you by appointment for a gastronomic visit! In season it is also possible to come and listen to the roar of the deer or discover mushrooms during guided walks.

Discover the wallonia of yesteryear in the Domain of the "Fourneau Saint-Michel".

Dive into the Wallonia of yesteryear during a visit in the past! The Fourneau Saint-Michel is 8 km from the centre of Saint-Hubert and not far from Awenne, Mirwart and Nassogne. In the domain there are 2 museums, 2 restaurants and a place

for mobile homes. The open-air museum (Musée de la Vie rurale en Wallonie), located in a beautiful clearing at the bottom of the valley, is on the path of the hike. It reflects life and architecture in Wallonia in the 19th and early 20th centuries.The Iron Museum is located on the site of a listed industrial heritage: the only charcoal blast furnace preserved in situ in Belgium! An absolute must for a visit to buildings that bear witness to an iron industry that flourished in Luxembourg in the 17th and 18th centuries. 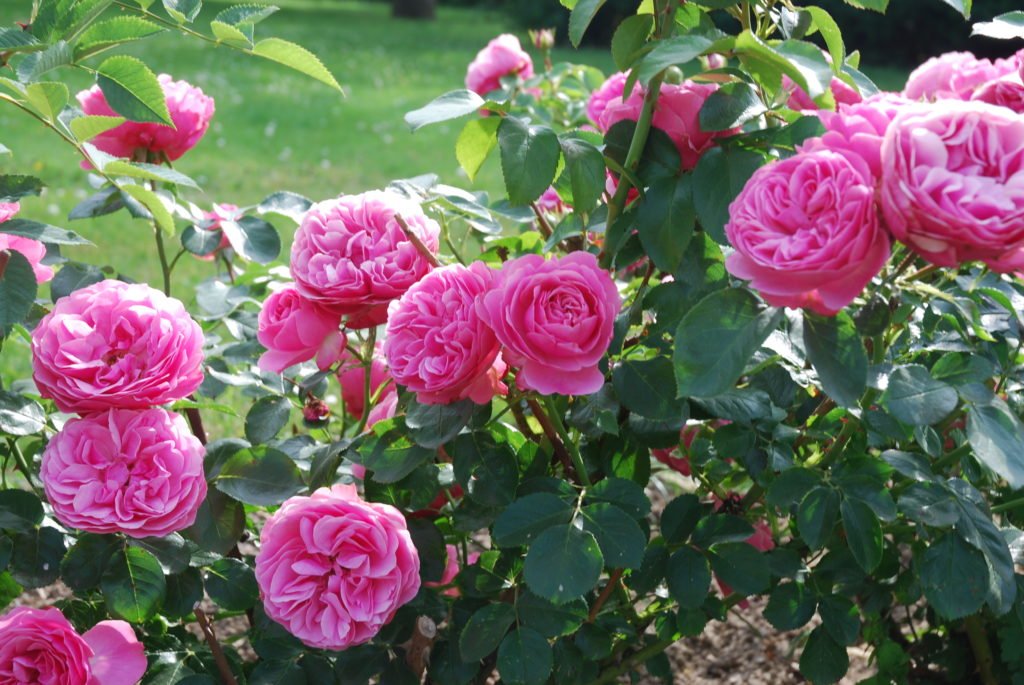 Another glorious figure whose history is linked to Saint-Hubert and nature: Pierre-Joseph Redouté. A museum, a fountain, a rose garden and a city walk are all emblematic and invite you to follow his footsteps…World famous for his roses (“Les roses de Redouté”), he was born in Saint-Hubert in the 18th century. He left the city at the age of 23 to go to Paris where he made plant and flower pictures for the most famous botanists of his time. He also participated in the King’s parchment collection deposited in the Jardin des Plantes, former Museum of Natural History. His pupils included Queen Marie-Antoinette, Empress Josephine (wife of Napoleon I) and Louise-Marie d’Orléans, the first Queen of the Belgians. He died in 1840 and his body lies in the cemetery of Père Lachaise in Paris.

The favourite walk of the Royal Syndicat d’Initiative of Saint-Hubert. The walk “Les Abanages” is especially recommended in spring (IGN card “Au pays de Saint-Hubert”). It is a 9.8 km walk during which you will discover the moors and their special landscapes. In the middle of forests mainly made up of deciduous trees, you will cross large plains which, with a little luck, will allow you to observe game. You will also be able to observe

“pierriers”, piles of rock waste dating back to the ice ages.  In addition, information panels on nature conservation and nature awareness can be found along the route. 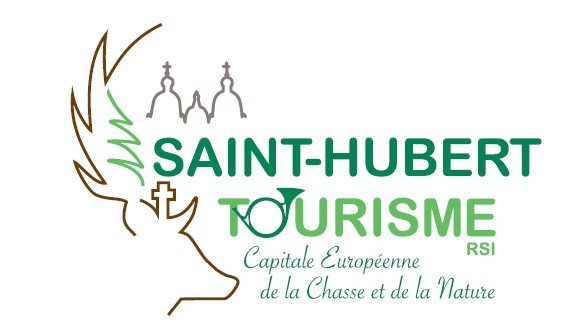 Libin, between heaven and earth

The municipality of Libin is one of these green spaces that is so much appreciated in the region. More than half of Libin is covered 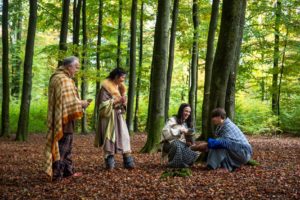 The municipality of Libramont-Chevigny, located in the centre of Belgian Luxembourg, is the largest municipality in the province and above all the junction between rural

Tellin, municipality with heritage and history

Tellin, situated between the Ardennes and the Famenne (like Wellin), offers listed sites, historical monuments as well as magnificent viewpoints. Its many natural attractions are

Between open landscapes, exceptional architectural heritage and centuries-old forest, the municipality of Wellin is a pleasant place to stroll around. The Lesse and its countless

The city of Tenneville is known for its crossing through the National 4 which, by the way, makes it so easily accessible, but it is

This website uses cookies to improve your experience while you navigate through the website. Out of these, the cookies that are categorized as necessary are stored on your browser as they are essential for the working of basic functionalities of the website. We also use third-party cookies that help us analyze and understand how you use this website. These cookies will be stored in your browser only with your consent. You also have the option to opt-out of these cookies. But opting out of some of these cookies may affect your browsing experience.
SAVE & ACCEPT